After combining for just 17 points over the first two quarters of Friday night’s game at Valencia High School, the Saugus Centurions and West Ranch Wildcats exploded for 50 in an exhilarating second half.

The back-and-forth affair was up for grabs a number of times but in the end, it was the Centurions riding the legs of Troy Williams to a 35-32 victory.

Williams was held to 21 yards on eight carries in the opening half, but the Foothill League’s leading rusher broke the 1,000-yard mark on the season and then some in the second.

Saugus head coach Jason Bornn gave junior quarterback Louis Eusebi some chances to throw the ball in the first half but trailing 9-8 to start the second, he decided to get the ball to his senior running back.

Carrying the ball 15 times in the third quarter alone, Williams went on to pick-up 153 yards and three scores on 25 total carries.

After injuring his arm early in the fourth quarter, he gave way to Marc Langford.

Langford, who also led the Centurions (2-4, 1-0) in receiving on the night, went on to rush for 92 yards on 16 carries, including two scores.

West Ranch did well to fight back and actually held the lead four separate times on the night, but just couldn’t get it done in the end.

Starting quarterback Chase Killingsworth played well for three quarters and used both his legs and his arm to keep the Wildcats (2-4, 0-1) in the game.

The senior signal-caller finished 13-of-22 for 107 yards and two scores through the air, while also rushing for a team-high 81 yards on 16 carries.

The Wildcats turned to junior gunslinger Jackson Clark to start the fourth quarter and his first passing attempt went for an 81-yard score to receiver Brendan Moskal.

Moskal finished with 158 yards on nine receptions, with his lone score giving West Ranch a 24-21 lead with 8:58 to go. 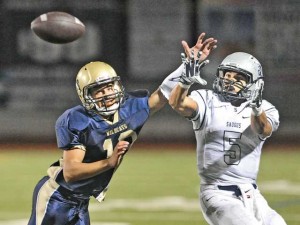 Saugus came back with a heavy dose of Langford however and the senior scored on runs of 5 and 26 yards to give the Centurions a double-digit lead.

Clark would find Zachary Heinz from 26-yards out to pull the Wildcats within three with just 1:37 left, but the onside kick was recovered by Saugus.