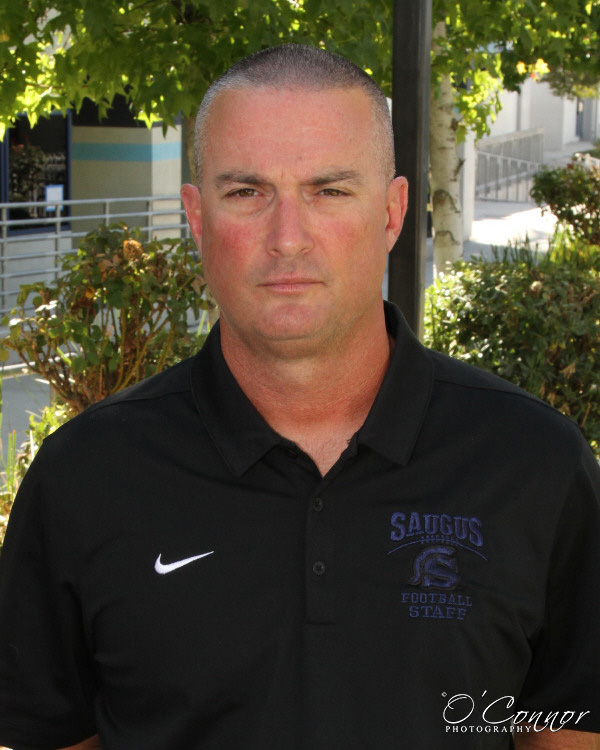 Jason Bornn enters his 32nd year of coaching football and his 19th as Head Coach of the Saugus Centurions with a record of 104 wins 94 losses, three Foothill League titles (2008, 2011, 2020), while reaching the playoffs 12 out of the past 16 seasons, with four CIF Semi-Final appearances (2016, 2013, 2008, and 2007). Prior to coaching at Saugus, Coach Bornn was an assistant coach at Occidental College, Canyon H.S. (Canyon Country, Ca), John Muir H.S. (Pasadena, Ca), and Village Christian H.S. (Sun Valley, Ca). While at Village Christian, Coach Bornn worked with the defense and built a reputation for hard-nosed, aggressive defenses that were consistently in the top statistical categories in the San Fernando Valley. From there, Coach Bornn moved on to John Muir HS in Pasadena. While at Muir, Coach Bornn coached a variety of positions and served as the Assistant Head Coach and Defensive Coordinator. From there, Coach Bornn would move on to the Santa Clarita Valley and coached at Canyon HS for the 2001 season. Following the 2001 season, Coach Bornn would move on and join the college ranks coaching the defensive secondary at Occidental College in Eagle Rock, CA.

Coach Bornn currently lives in the Santa Clarita Valley and is married to his beautiful wife, Veronica. They have three gorgeous children, Angelo 20, Julian 18 and Paloma 16. Coach Bornn enjoys sharing time with his family, vacationing, reading, and dining out.

Coach Bornn believes that the young men who participate in football at Saugus can be taught life skills and lessons through the gridiron. Many of the skills needed to succeed in life, commitment, discipline, perseverance, integrity, and believing in one’s ability to go above what was thought to be impossible, are taught daily by Coach Bornn. By putting all of these qualities together, coupled with team building and leadership training, students who play football at Saugus are gaining valuable skills for life. Finally, Coach Bornn stresses the importance of each player striving to give the very best of themselves at all times. If a player can go home at night, look himself in the mirror and know that he has nothing to be ashamed of and gave all he could, then success was achieved.

Coach Arana enters his second year at Saugus high school. Coach Arana oversees all aspects of the athletic performance of the Saugus High school football team. His primary responsibilities include developing, implementing, and leading the football team’s sports performance program. In addition, coach Arana provides the Saugus high school football program comprised of short- and long-term physical preparation training. A highlight of this training is implementing the multi-year training system to cater to the skills of our frosh/soph and varsity teams. This program includes a holistic approach to the development of athletes, ensuring the mastery of one skill before moving forward with the development of a more advanced skill. Coach Arana comes to Saugus high school after finishing a two-year learning experience with the UCLA Football Performance staff under strength coach Frank Wintrich. Coach Arana’s responsibilities at UCLA were the supervision, maintenance, and oversight of the weight room, assisting with the design, implementation, and management of strength training and conditioning programs for the football team, and specializing in working with the OL/DL. Previously, Coach Arana worked at nearby Bishop Alemany high school boys’ and girls’ soccer teams (2018 – 2021), California State University-Los Angeles, assisting the staff that serves 13 NCAA Division II teams. College of the Canyons (women’s soccer) and California State University-Northridge (student/assistant) helping to oversee and maintenance of the weight room that serves 19 NCAA Division I men’s and women’s teams. Coach Arana is a COC alumnus and transferred to CSUN to finish his education in Kinesiology-Sport Studies.

Rocco Cordola enters his 28th year of defensive line instruction in his coaching career. This will be his 4th year at Saugus and 2nd on the varsity level with coach Bornn. His football coaching career started at Bishop Alemany high school in 1993 for 8 years where he began to learn the “tools of the trade” as a d-line coach, often visiting other high school and college coaches for instruction and tutelage, trying to grow his knowledge of the game he loves.

From there, “Coach Roc” interviewed at College of the Canyons for the defensive line coach position and was hired out of several candidates. Sending over 40 players to the division one, two and three programs; including two d-linemen to the NFL Jason-Pierre-Paul (Drafted 15th by the New York Giants and Current Super Bowl Champion with the Tampa Bay Buccaneers) and Domata Peko (Cincinnati Bengals and Denver Broncos). Coach Roc still feels the best part his college coaching experience is staying in touch with his past athletes and hearing how they have become wonderful, husbands, fathers and good men in our society today. After an 8 year stretch at COC, he stepped down so he could coach his twin boys Amedeo and Joey in youth football, winning 5 championships at the youth level before following them to Saugus High School. Currently, Amedeo is a senior on the football team and Joey is playing baseball for Saugus as well. His daughter Sierra enters her freshman year at Saugus and is due to graduate in 2025. Through it all, none of this could be possible without the support of his loving wife Lori who decided to take this journey with him 21 years ago this October.

Coach Maxwell is a graduate of Village ChristIan (Class of ‘12) where he lettered in three sports and was a Team Captain for the Football program. Coach Maxwell completed his Accounting Degree at California State, Northridge while coaching for five years at Heritage Christian as the Offensive Coordinator. He transitioned to Saugus during the Summer of 2019 as he was completing his Teaching Credential and is now a teacher on campus. In 2020 he took over coaching the Defensive Backs. He prides himself on getting the most out of his players by educating them and preparing them to handle the many different scenarios they may encounter on the field. He thanks his beautiful wife for letting him devote so much time and energy to the young men and this program.

Coach Mears has lived in Valencia for fourteen years with his wife Janel, who is a kindergarten teacher.  Coach Mears’ son Kyle graduated from Saugus as a multi-sport athlete in 2012.  His daughter, Jenna, was the placekicker for the Varsity football team in 2013, the same season she was named Homecoming Queen.  Coach Mears also has two stepdaughters – Hannah, who attends Moorpark’s Exotic Animal Training Program, and Chloe, who attends Chapman University.

Coach Mears graduated from CSU Northridge with a degree in Economics.  In his life away from football, Coach Mears is a Registered Investment Advisor.  His father, who played football at UCLA, raised him to root for the Bruins in both football and basketball.  He has also been a dedicated Angels baseball fan since 1972.

Coach Russell, a graduate of Saugus High School (Class of ‘89), returns for his 26th season with the Centurions and 15th as the offensive coordinator. Coach Russell is currently an economics/ government teacher at Saugus High. When he is not coaching football he enjoys spending time with his beautiful family, Momoko, Ken and Emi.

This will be Coach Stiman’s 4th year coaching at Saugus High School and 8th year coaching overall.  His coaching career started in Santa Maria until he moved back to Santa Clarita to come to Saugus.  Currently, he is teaching basic Algebra and Biology.  On the field, he is the JV head coach, JV Offensive Line Coach and Varsity Offensive Line Coach.  In the past he has coached wide receivers, defensive backs, special teams and now the offensive line.  There is no other school he would rather be at and he can’t wait for this season to kick off!

James Stirwalt was a Saugus student-athlete graduating with honors and receiving All CIF Southern Section Defense and First Team Defense recognition as a linebacker for the Centurions in 2017.  His passion for football drove him to assist in coaching a SCV Senior Warrior team followed by SCV Chrome and progressed to becoming an assistant coach for the Saugus freshman level for two years.  This will be the second-year, James is the defensive coordinator for the Saugus Frosh/Soph level.  In June 2022, James received a Bachelor of Science degree in Biological Sciences with honors from the University of California, Irvine.   He is currently working to obtain his EMT certification and aspires to become a medical physician.  When not studying or coaching, James enjoys surfing, fishing, camping and the outdoors with friends and family.

Coach Mound is entering his first season with Saugus Football serving as the Frosh/Soph Wide Receivers and Outside Linebackers Coach. Coach Mound graduated in 1999 from Hudson Falls High School in NY where he played Football for the Tigers for six seasons as a Running Back and Cornerback/Safety. In 2000 Coach Mound played for the semi-professional league, the Glens Falls Greenjackets, starting as a Running Back. In 2003 he received his Associate Degree in Travel and Tourism Management from the University of New York at Delhi. In 2004, Coach Mound enlisted in the US Marine Corps. While serving in the Marine Corps, he got involved in coaching the men’s Football league on the base. He coached the Running Backs and Cornerback/Safeties during the 2005 & 2006 seasons. In 2007, he joined the South Valley Raiders Pop Warner football league, Coaching the 13 & 14-year-olds coaching the Running Backs, Cornerbacks, and heading up Special Teams. In 2013, Coach Mound graduated from the University of Phoenix with a Bachelor’s Degree in Business Management. Coach Mound loves the game of Football, and prides himself on helping to develop the players’ skills and techniques. Outside of Football he enjoys spending time with his wife, Tracy, his three boys, CJ, Jayden, and Kai, and his two dogs, Sarge and Gunner.

Coach Michael Torres is a 2007 Saugus High School and football alumni. He is back for his 3rd year of coaching the outside linebacker position. Over a lifetime of playing this sport, football has taught him so many positive attributes that he has been able to apply to life outside of football. His goal is to give back to his football family while teaching these boys the fundamentals of life & football!

“No discipline seems pleasant at the time, but painful. Later on, however, it produces a harvest of righteousness and peace for those who have been trained by it. Therefore, strengthen your feeble arms and weak knees.” – HEBREWS 12:11-13

Coach Kwak is thrilled to be back on the coaching staff this season! He played 4 years at Saugus and graduated in 2014. He then played 4 years of football at Linfield University majoring in History. During one of his college years he took a season off in 2015 to coach varsity and freshmen at Saugus. After graduating college, he was an assistant coach and recruiting coordinator at Linfield during the 2019 season. In 2021 I moved back to Santa Clarita with his girlfriend Sarah and this spring he graduated with a Masters degree and teachers credential from Grand Canyon University. Next fall he begins his first teaching position at Rancho Pico Jr. High School in the Hart District.

Coach Hernandez is entering his first-year coaching WR/DB Frosh/Soph at Saugus High School. He was previously Varsity Wide Receivers Coach at John F. Kennedy High School in Granada Hills. He graduated from Chatsworth High School (’05) and received a B.S. in Kinesiology from California State University, Northridge (’13). Outside of Football, he is a Business Broker living in Saugus with his wife, son (who is currently playing at Saugus), and daughter.