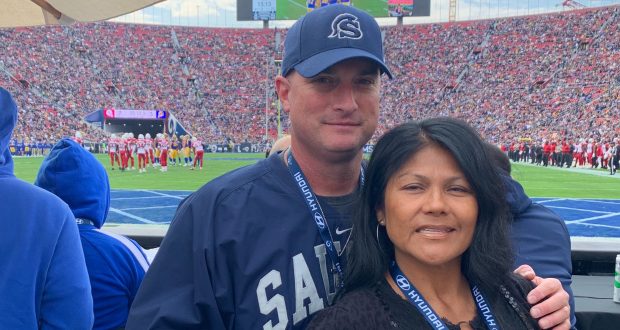 Saugus Football Head Coach Jason Bornn and his wife in the End Zone Suites of the Coliseum at the Rams game against the Arizona Cardinals. (Photo courtesy of Jason Bornn)

Saugus Football Head Coach Jason Bornn was honored as the 2019 United Healthcare Coach of the Year at the Los Angeles Rams final home game at the Coliseum on Sunday.

During the pre-game festivities ahead of the Rams final game of the season against the Arizona Cardinals, Bornn was brought onto the field and celebrated.

“It’s obviously humbling and very exciting and cool, but at the end of the day, we were given a cash award that’s going to be used for our program, and that’s what I’m most excited about,” said Bornn.

In addition to being honored on-field and receiving the cash award for the Saugus program, Bornn and his wife got to take in the game from the endzone suites.

“The Rams have done an outstanding job of reaching out into the community,” said Bornn. “They don’t have to, but they do and they do it well. They treat those folks they want to honor right; whether it’s coaches, veterans or first responders, they treat and make you feel special.”

Saugus Coach Jason Bornn on the Jumbotron as he is honored as the LA Rams’ United Healthcare Coach of the Year. (Photo courtesy of Jason Bornn)

Saugus Coach Jason Bornn on the Jumbotron as he is honored as the LA Rams’ United Healthcare Coach of the Year. (Photo courtesy of Jason Bornn)

The path to the coach’s selection stretches back into the early weeks of the regular season.

“Back in the second week of the season, I was informed that our game versus Agoura High School was the Rams’ Game of the Week. After the game, some people from the Rams came up and gave me a sign that said ‘Coach of the Week’ because we won,” Bornn said.

Bornn went on to learn that the Rams organization handed out the award each week, so by the end of the season, there were 16 different coaches, each of which was eligible for the Coach of the Year award, which was selected by a public vote.

In another display of the power of the #SaugusStrong community, people across Santa Clarita rallied the votes for Bornn to take home the award.

While Bornn is excited to put the award money into the program, he’s not yet sure what they specifically will use the money for.

“There’s nothing in particular; we have a couple needs that seem to come up each and every year,” Bornn said. “We’ve got to make a list to prioritize our needs and wants and go from there.”

Whatever the money goes to, the opportunities it helps create for the future young men of the Saugus football program is priceless, according to Bornn.

“We’re definitely concerned with more than just winning and losing. If you’re going to compete in any endeavor, trying to win should be a top goal, but that’s not our only goal,” Bornn said. “Our goal is to develop young people and help them grow so they can move on as better people when they leave the program than when they joined it. That’s what drives us, trying to get kids to be the best versions of themselves.”

There is still time!! VOTE FOR COLTON for the Southern California Boys Athlete of the Week! You can Vote multiple times!! Show our awesome QB some love and VOTE multiple times! Share this post!💙#saugusfootball #ourqbisthebest #voteforcolton #leaguechampswww.ocregister.com/2021/04/20/vote-southern-california-boys-athlete-of-the-week-april-23 ... See MoreSee Less

“Saugus Football League Champs Merchandise” is available NOW!! Shop will be open for order until Sunday April 25. All orders placed by this day, will be processed and fulfilled within 7-10 days. www.baggersports.com/team-shops/schools/saugus-football/ #saugusfootball #UndefeatedLeagueChamps #HomeofTheBell ... See MoreSee Less

VOTE FOR COLTON for the Southern California Boys Athlete of the Week! You can Vote multiple times!! Show our awesome QB some love and VOTE! 💙#saugusfootball #ourqbisthebest #voteforcolton #leaguechampswww.ocregister.com/2021/04/20/vote-southern-california-boys-athlete-of-the-week-april-23/?fbclid=... ... See MoreSee Less