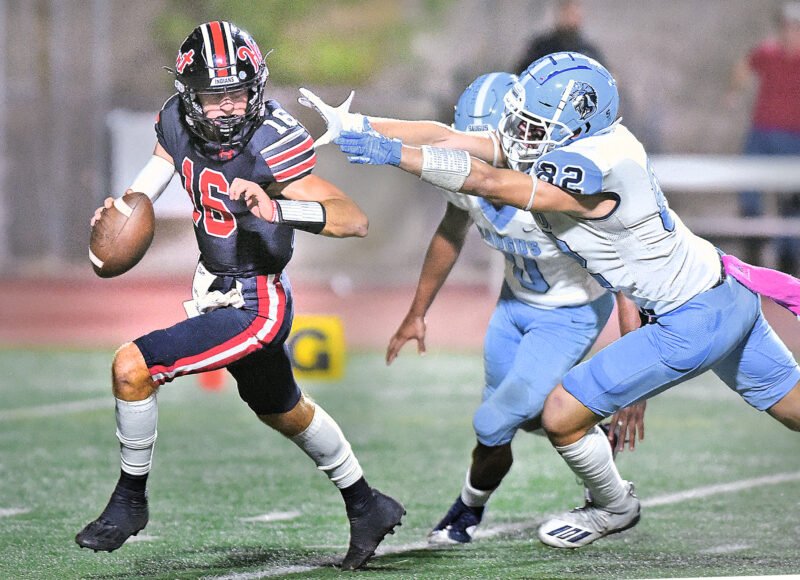 By Tyler Wainfield for The Signal

Centurions return from the bye, emotional week with impressive defense

Saugus senior Vinny Gallagher saw the end zone, but he didn’t want it.

Or so he says.

“I’m gonna go with I slid, or I fell, so that the clock kept running, you know. I wasn’t really going for the touchdown,” Gallagher said.

With the Centurions leading Hart, 14-6, with just over a minute left in regulation, Gallagher ran 18 yards before going down to give his team a first down. And with the Indians having used all three timeouts, Saugus could run the clock out.

The game was the first for Saugus since the loss to West Ranch in Week 6, and also the first since the William S. Hart Union High School District banned the players from carrying the “Thin Blue Line” flag onto the field for games. Many in the Saugus stands were seen carrying those flags, or wearing shirts, in protest, while others were standing at the front gate.

Bornn said prior to the game that his team was solely focused on the game, not the outside distractions.

Both Saugus touchdowns came in the second quarter. Gallagher ran it in from 3 yards out with three minutes to go in the frame to put the Centurions up, 7-0. With 1:26 to go, senior AJ Goodman placed himself perfectly behind the Hart secondary to corral senior TJ Cataldi’s pass, and he ran it the rest of the way to complete the 70-yard score.

“It’s just a great throw by TJ,” Bornn said. “The coverage was there, he extended the play by running around, he saw AJ open and he fired it to him.”

Hart head coach Rick Herrington was less impressed with the catch and more upset with his defenders missing a player behind them.

“We get that deep ball that both our guys think the front guy is going to get it, he’s the only one going up for it,” Herrington said. “Then you realize [Goodman], our corner’s supposed to have him, doesn’t even realize [Goodman] is behind him. So he comes up trying to pick the ball off, and it just goes too far.”

The Indians managed to make it a one-possession game early in the fourth on a 1-yard run from senior Donovan Dunn. But then two false starts pushed the extra point back 10 yards, and the ensuing kick was missed.

“It turns out little things like that [hurt you], you know, and we’re almost all juniors. So hopefully it’s a learning experience for next year,” Herrington said. “I hate to talk about next year you know, you still got three games left and we win those three, you know, there’s a slim chance there we might sneak in [to the playoffs]. You never know.”

Bornn held senior Jake Viger out of the game despite him having two weeks to recuperate from an injury. The reigning Foothill League Player of the Year, so important in pretty much every phase of the game for the Centurions, had some able replacements, though.

Cataldi took over as punter, and he booted two long-range punts that were downed at the Hart 1-yard line. At running back, Gallagher led the team with 17 rushes for 53 yards. Senior Deohn Turner picked up four sacks, two in each half, with the first two also seeing senior Dario Sandoval help out.

“We got to play for each other. We got to have each other’s back,” Gallagher said. “We knew Jacob was beat up … We just are ready to go, you know. We got guys everywhere. Jacob’s a huge player for us, huge player. But when he goes down, you know, guys got to fill and that’s what they did tonight.”

Hart, held to just 210 total yards of offense, was stifled in the first half, amassing just 59 total yards. The Indians were able to pick up some steam in the second half, but the Saugus defense held strong when it needed to.

“Honestly, it was just during film,” Turner said of his team’s defensive prowess. “I know how their blockers are going, whether they would go down to B, C, so I would call in switches and stuff, just shoot the open guys.”

Hart will now look to pick up its first Foothill League victory of the season next Friday at Canyon at 7 p.m.

Saugus will host Castaic next Friday right back at Cougar Stadium at 7 p.m. Bornn is hoping that Viger, and a few other players nursing injuries, can get even more healthy for that game and the ones to follow.

“Some guys are still recovering. It’s still a work in progress,” Bornn said. “So we’re just going to continue to try and get healthy and get better for next week.”